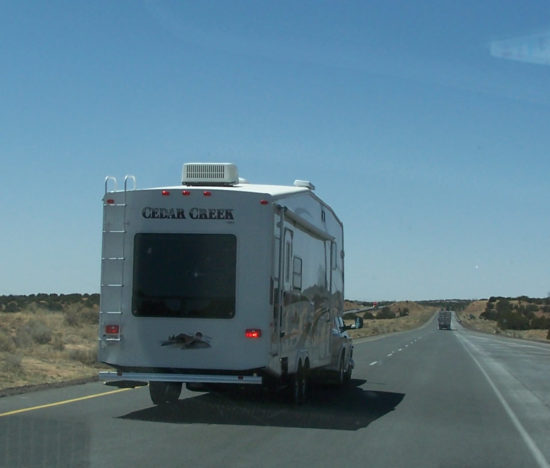 I did a turn signal & marker lights upgrade on my fifth wheel RV.

Have you ever been towing your travel trailer or fifth wheel and signaled to make a lane change and the guy next to you just doesn’t seem to get the message? You watch your mirror, waiting for him to take some kind of action that will allow you to move over but he just hangs there next to your trailer.

It’s bad enough when it happens out on the highway, but when you’re in urban traffic trying to maneuver 50 feet of rig for an upcoming turn or lane merge it can get frustrating really fast.

If you think about it, if a motorist is alongside your trailer, there’s a good chance he can’t see your rear lights and it’s possible the turn signal light on your truck is obscured by the front corner of your trailer.

I truly feel the extra turn signal and marker lights help make my intention to change lanes apparent to motorists and make it safer too.

When we purchased a new fifth wheel, one of the first modifications I did was to add an extra pair of signal/marker lights. And, on the theory that more is better, I added two more signal lights to each side.

Installing the lights along the skirt of the trailer was as easy as anyone could hope for. The skirting is totally cosmetic and the underside is completely open. I tapped into the wiring for the tail lights for the rear and middle turn signals. For the front turn signal/marker lights I tapped into the junction box for the umbilical cord.

The wiring for the lights would run along the main frame members under the trailer so I wanted to make sure it was well insulated and weatherproof. I went to the local builders’ store and purchased a 100ft 14 gauge outdoor extension cord. It was plenty long enough, durable, had the three conductors I needed and it was inexpensive.

There are plenty of different connectors I could have used but I am ‘old school’ so I just soldered and taped the connections. Nowadays I suppose heat shrink tubing would make better, neater insulation.