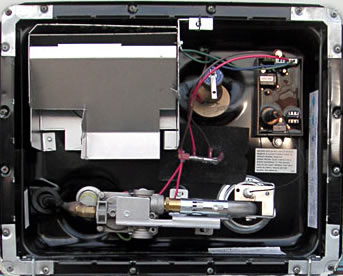 A while ago I noticed water leaking from our Attwood RV water heater. It was a small leak, just a slow drip. I opened the access panel and found the leak was coming from the drain plug.

No problem I thought, I’ll get a wrench and give the plug a half turn and all should be good.

As soon as I put the slightest torque on the wrench the head of the plug broke off and a steady stream of water flowed past what was left of the plug still in place.

After a quick dash to the park water faucet, I eventually managed to remove the plug remnant from the tank. I could see that, while the head of the the plug looked fine, the part of the plug actually threaded into the tank had become discolored. It was also hard and brittle. The end if the plug was not even round.

The water stayed off while I made a run to a nearby RV shop for a replacement plug. Having the water off wasn’t a huge problem but it was an avoidable inconvenience.