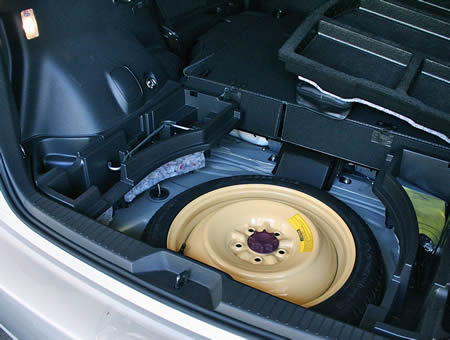 This tip comes from Jim Foreman a member of the RVBasics Yahoo Group.

I have a 1996 Chevy Lumina Van with a donut spare hidden down under the back end where you never think of it until it’s needed. Mine had been on the ground for perhaps five miles in it’s nearly 20 years of life. But recently I’ve noticed that every time I checked the air pressure, it was down to about 25psi which might get me to a station but probably not.

Any tubeless tire over about 8 years old is over the hill so should be replaced.

Went to a big discount tire place and the salesman told me a new tire would run close to $100 and would have to be ordered. Then he suggested replacing the wheel with a standard size one and a good takeoff tire for just the price of the wheel. He had to go down a size smaller tire than what’s on the ground to fit in the space but no problem for a spare. He found a tire they had taken off with about half the tread and only two years old. Mounted it up and charged me $49.95 for just the wheel.

Note from Steven: Thanks Jim. That’s good info and it seems like you have an honest tire guy. Readers should check to see if there is room for a ‘real spare’ in their vehicle.
——