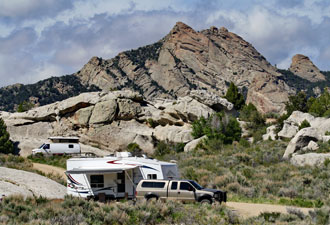 The term boondocking is often loosely used by RVers to describe any ‘camping’ outside of RV parks and designated campgrounds. Boondocking usually implies dry-camping… camping without hook-ups. Because the term is used so loosely it sometimes causes confusion, especially among RV newbies.

What is Boondocking?
Boondocks is defined as backwoods, backcountry, middle of nowhere, wasteland, bush; informally as boonies, sticks. So, in it’s strictest definition “boondocking” is camping in the “boondocks.” This type of camping is usually on public lands… state and national forests, Bureau of Land Management (BLM) lands, etc. and is free or very low cost. In boondocking areas, there are usually no developed facilities and never any hook-ups. Rules are mostly relaxed… based on civility and consideration of others and the environment.

What is Dry-Camping?
Dry-camping means camping without hook-ups. No water, electricity, or sewer hookups but rather using your RV’s ability to be self-contained. You might dry-camp in a city park, a state or federal campground, a private RV park, a relative’s driveway or a parking lot.

What is Overnighting?
Overnighting refers to short ‘overnight’ stays at places other than campgrounds and RV parks… Wal-Mart and Flying J parking lots being examples. When overnighting, RVers are almost always dry-camping but rarely boondocking.

Of course, when used together with RV, the word ‘camping’ creates nearly as much confusing and often heated debate. But we’ll cover that another time.
————–

About the Author:
During nine years of shunpiking, (driving the back roads) Marianne Edwards and her husband have found hundreds of free campsites. In response to questions from friends and relatives, who wonder how they can afford to travel as often, as far, and for as long as they do, The Edwards’ have written a series of RV travel guidebooks they call The Frugal Shunpiker’s Guides
RV Boondocking In New Mexico
RV Boondocking In Southern Texas
RV Boondocking In Arizona
Click Here for More Info!
—————–