Monday, 23 May 2022
You are here: Home Reviews Product Review: LED Lights For Your RV

Fran and I were in Quartzsite, Arizona last March for a few days. The season was winding down, the RV parks and vendor areas had thinned out considerably, but there were still plenty of vendors left and we spent lots of time looking and buying. It’s impossible not to buy something… it’s Quartzsite… you’ll find something you can’t live without. For me it was socks, a folding chair and LED lights. 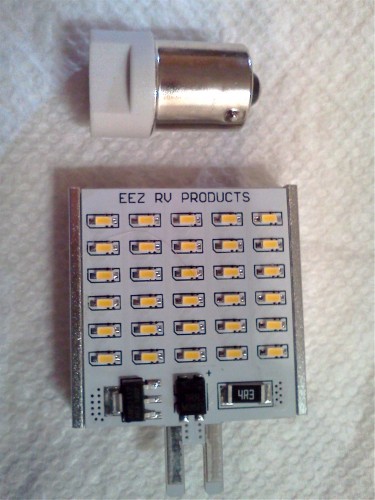 It’s the LED lights I want to tell you about because they are quality lights and you don’t have to visit Quartzsite to get them. They are available online at: eezrvproduct.com

My first attempt at using LED lights didn’t work out. I bought two LED lights on ebay but they were bright white rather than the warm white or daylight color of incandescent bulbs. I tried them for several weeks but I just couldn’t get used to white light and went back to incandescents. If you think the color of the light might be an issue with you them pay attention to which lights you buy.

When I saw the LEDs on the display board in the EEZ RV Product Quartzsite vendor tent the first thing I noticed was the warm white color and how bright they were. Looking closer I could see they were made well… much better than the ones from ebay… and even had an aluminum heat sink.

I installed two of the LED lights in the overhead fixture above my computer station. Since I spend a lot of time at the computer and the area is dark even during the day the lights are on 12 to 16 hours a day. Because the lights were on constantly the heat buildup would cause the incandescent light bulbs to fail frequently. To make things worse, over their lifespan, incandescent bulbs get dimmer. This fixture was the perfect one for LED lights.

I’ve been using them for over 4 months now and they are just as bright as when first installed and they are brighter than the incandescent bulbs they replaced providing plenty of light.

The lights are made for the new T10 socket but come with an adaptor for bayonet bulb sockets. When looking at the website for this review I noticed  the lights they are offering now have 12 LEDs where mine have  30 LEDs. I’m sure the 12 LEDs are equivalent since LED technology is ever improving.