A class of street-legal electric vehicle known as Neighborhood Electric Vehicles (NEVs) is making it easier and more affordable than ever for people to get around campgrounds and RV resorts.

Also known as low speed vehicles (LSVs), these sleek, Euro-style zero-emissions vehicles can be driven on roads with speed limits of 35 miles per hour in most states, Ingersoll Rand reported.

“NEVs are the automotive equivalent of the slow-food movement,” said Mary A. Sicard, consumer marketing manager at Club Car, the manufacturer of the Villager LSV. “They’re timely, intelligent and cool. What’s more, they encourage the slower-paced lifestyle so many people want, and they’re easy to park, even in congested areas.”

NEVs are open to sights, scents and sounds, said Sicard, who noted the vehicles are also silent, 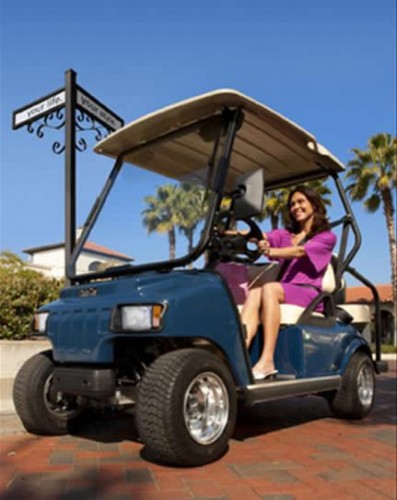 “These vehicles are ideal for neighborhood transportation, shopping, dropping kids off at school, going out to dinner, zipping to the gym or just cruising,” Sicard says. “They make driving a pleasure, not just a means to an end.”

In the United States, it cost about half as much to operate a NEV as a gas-powered vehicle. “They can be charged through a standard 110-volt outlet, so you won’t have to pay $300 – $1,500 to install a 220-volt outlet as you would to juice an electric car. You’ll get up to 30 miles from a six-hour charge,” Sicard says.

Although people sometimes mistake them for golf cars, NEVs are often a more practical choice for neighborhood transportation, said Sicard.

The term “golf car” is used to refer to many different types of vehicles, but legally a golf car is a vehicle for use on golf courses for the game of golf. When golf cars are used off course, they are classified as Personal Transport Vehicles, or PTVs.

PTVs can be gasoline or electric powered with a maximum speed of less than 20 mph. They may be driven on public roads as defined by state and local laws for purposes unrelated to golf. PTVs are not classified as motor vehicles under federal law and are not regulated by the National Highway Traffic Safety Administration (NHTSA) but by state and local governments.

NEVs, on the other hand, are classified as motor vehicles and regulated by the NHTSA.

Here’s the rub. Original manufacturers of golf cars keep the maximum speed below 15 mph. Yet owners sometimes have their vehicles modified to increase the speed. This can have legal ramifications, said Sicard.

“If a golf car is modified to go 20–25 mph, it becomes by definition a NEV and is subject to the NHTSA requirements. In effect, many people are driving a NEV when they think they are driving a golf car,” she explained. “That can leave them open to liability and litigation, especially in the event of an accident.”

Here are the major differences between PTVs and NEVs:

“Obviously, you can’t drive a NEV on a cross-country road trip, but you can use it for hundreds of short trips each year,” said Sicard. “And, with more than 75 percent of all American vehicle trips coming in at 10 miles or less, these jaunts adds up quickly.”

Club Car is part of the Industrial Technology Sector of Ingersoll Rand, and is based in Augusta, Ga. For more information, visit www.clubcar.com.