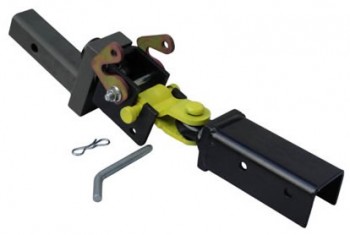 According the National Highway Traffic Safety statistics there are 418 injuries, eight deaths and more than 700 incidents of property damage caused by vehicles towing trailers, every week. Each year more than 20,000 people have needed medical attention for accidents involving trailers towed by passenger vehicles.

“It even costs the American economy almost $2 billion every year,” said Gregory Russell, the developer of the new Lock ‘N’ Roll latching system. “And it’s no surprise; the standard ball hitch that is most commonly used is difficult to attach and can even appear secure when it’s not. It isn’t uncommon for a standard ball hitch to disconnect, en route, sending a loose trailer into traffic.”

Russell, a fifth generation blacksmith from Chicago, has been developing a solution to this deadly problem for years. When designing the Lock ‘N’ Roll articulating trailer hitch, he utilized 360 degrees of rotation and three axis of movement, eliminating the danger caused by bumps and potholes. This allows trailers to be safely towed on uneven terrain, also making it ideal for off road adventuring, he explained.

“Lock ‘N’ Roll is made with a patented latching system that is far safer than a traditional ball hitch connection,” said Russell. “Once the latch plates are locked in place, Lock ‘N’ Roll will never pop off like ball hitches do. Everything is in plain view to eliminate any question of whether or not the trailer is hitched correctly. The positively secured connection keeps you in control so minor mishaps on the road don’t turn into major accidents.”

Not only is the Lock ‘N’ Roll a better and safer design, Russell explained, these trailer hitches are made using old world craftsmanship that imparts optimum strength into each, carefully manufactured hitch. These are heavy duty products made of alloy steel parts and are built to withstand the uncertainties of travel, making the roads safer for everyone, he added.