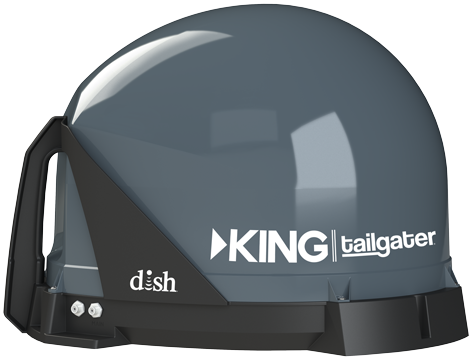 King is introducing two new automatic satellite TV antennas for use with Dish and DIRECTV satellite services. The new, second-generation King Tailgater for Dish (Model VQ4500) and King Quest for DIRECTV (Model VQ4100) are designed for use as either a portable or a roof mounted satellite system.

“In recent years, the demand for mobile satellite antennas has shifted significantly toward portable systems due in large part to lower price points” said Craig Bartyzal, vice president of sales for King. “While portables do offer greater flexibility, many RV owners still want the convenience of a permanently mounted antenna that does not require additional set-up when arriving at their campsite.”

“We believe these new antennas provide an affordable option for both” said Bartyzal. “By combining power and data over the coaxial cable we’ve reduced the complexity of the installation and the required labor time to install.”

At 8 pounds and 13.5-inches high, the new King Tailgater and Quest antennas are smaller and lighter than any previous models yet provide improved signal reception, the release continued. The new aerodynamic shape is the result of significant effort put into the industrial design, the release stated.
“We worked with a team of industrial design engineers to optimize signal reception, aerodynamics, manufacturability and the overall user experience” said Craig Miller, president of King. “Making the antenna smaller while improving signal reception capabilities was no small task, but we completely redesigned the antenna, optics and chassis to achieve this. We also integrated the mounting feet to allow for roof mount installation without the need or expense of additional mounting hardware.”

Like the first-generation Tailgater antenna introduced in 2011, the second-generation King Tailgater works exclusively with Dish’s pay-TV service. The new antenna delivers more installation choices to Dish customers, who can choose to permanently install it on a RV rooftop or use it portably, the release stated. It is compatible with Dish’s current model ViP211z mobile HD receiver, as well as legacy receiver models 411, ViP211 and ViP211k.

Once powered on, owners use their Dish remote control to select the state in which they are traveling. From here, the King Tailgater will scan to automatically locate three Dish satellites, delivering access to HD channels in minutes.

The King Quest antenna works with DIRECTV SD programming with the option of adding a controller accessory (purchased separately) to make the system compatible with Dish HD and Bell TV services as well. The company said the King Quest is the only automatic RV satellite antenna of its kind to offer a coaxial only cable connection without the need for an external power or data cable when used with DIRECTV service.