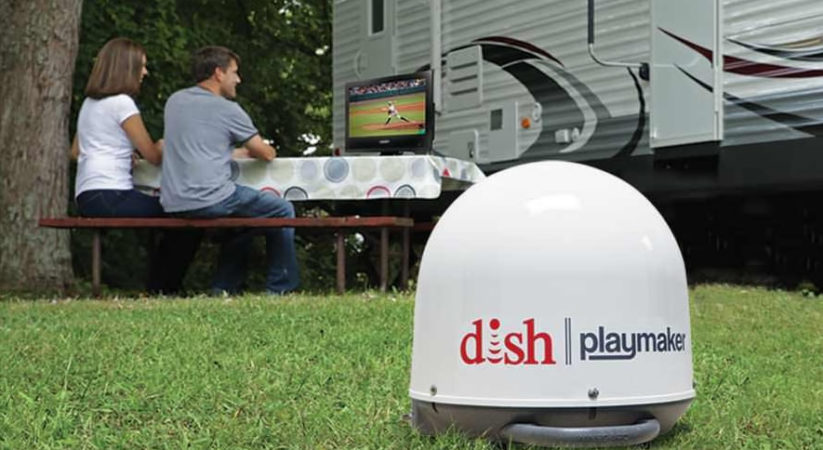 We have been using the Winegard Dish Playmaker satellite antenna for several months now so I wanted to do a review to let you know what we think about it.

Just so you don’t have to read the whole review to find out: Yes, we like it.

We are parked in our Son’s driveway and when we first arrived here I managed to find a spot to set up the tripod and point the dish through a small opening between trees and had pretty good signal strength. However, over time the trees leafed out and branches grew and the signal strength weakened. Eventually, we could no longer get reliable reception. With nowhere else practical to place our tripod dish antenna I had to find another way to get a signal.

The only place near our RV with a good shot at the satellites was the roof of our Son’s house. I didn’t want to put the tripod dish up there because I did not want a semi-permeant installation nor did I want to go up on the roof to aim it and service it. So I purchased the Dish Playmaker made by Winegard. Actually, I purchased the Playmaker and a Wally Receiver combo.

When the Antenna and receiver arrived I set the system up temporarily, just to get it working, with the Playmaker on the ground in the middle of the driveway. It was pretty easy just following the printed setup guide and on-screen directions. Once the Dish Playmaker had paired with the Wally receiver and located the satellites I called Dish to activate the Wally. When our Son got home from work he set the Playmaker up on the roof for us.

The Playmaker has been on the roof now for a few months and has endured several big rain storms and high winds and it is still working just fine.

Yes, we like it but, as with most everything, there are pros and cons.

A note about the Wally Receiver

The Wally is a basic receiver that does not have a hard drive for recording and does not support Dish Anywhere service.

You may also be interested in this article: King has new automatic satellite TV antennas for Dish and DIRECTV