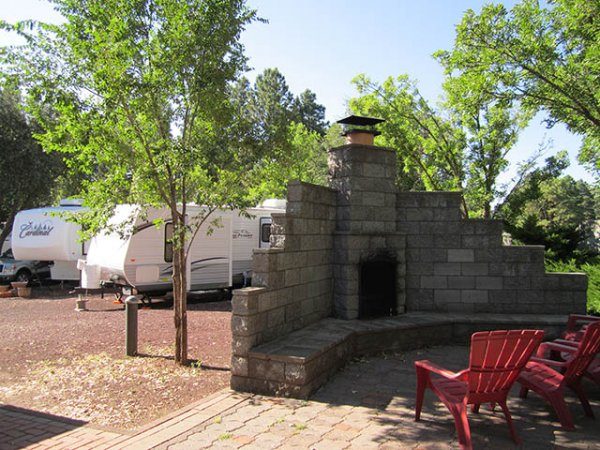 Northern Arizona RV parks are reporting unusually high occupancy levels and expect the surge in visitors to last throughout the summer months.

“There are more RVers on the road this year than ever before. I’ve never seen it like this before,” said Jo Ann Mickelson, who has co-owned and operated the 52-site J & H RV Park in Flagstaff with her husband, Harvey, for the past 35 years. “The phones are ringing off the hook. I can’t even sit down.”

J & H RV Park has been busy since May and Mickelson says her park is booked solid until late August.

Mickelson, who also serves as executive director of the Arizona Association of RV Parks and Campgrounds, said Flagstaff area campgrounds and RV parks are not only filling up with travelers, but residents from central and southern Arizona who are fleeing the desert heat.

“On Friday, coming up here, it’s bumper to bumper from Phoenix,” she said. “We’re sending a lot of people to Williams and to surrounding communities that don’t necessarily get booked and filled up.”

Clint Bell, whose family manages the Flagstaff KOA and owns two other KOA campgrounds in Williams, said he, too, is seeing a dramatic increase in visitors this year.

“We’re up all the way across the board,” he said, adding, “We’re having a great start to the summer season.”

Bell added that while Flagstaff has always been a key destination for overnight travelers in northern Arizona, Williams is becoming more of a destination itself, not only because it offers an alternate route to the South Rim of the Grand Canyon as well as the Grand Canyon Railway, but because of the development of other local tourist attractions in recent years.

In fact, the Bell family also acquired the Circle Pines KOA in Williams from another family last year based on their confidence in the continued growth of the Williams economy with the draw of the Grand Canyon Railroad and Bearizona.

Meanwhile, the Grand Canyon itself is also seeing a dramatic increase in tourism, which is drawing more tourists into Williams and other gateway communities to the national park. More than 6 million tourists visited the Grand Canyon last year, up from 5.5 million in 2015, according to National Park Service statistics.

But the northern Arizona RV parks around Williams and Flagstaff are not the only one see more travelers.

Heading to the east, the 71-site Meteor Crater RV Park in Winslow is also seeing a surge in visitors, according to Frank Pease, the park’s manager.

“We have been busy since March,” he said, adding that his park starts filling up after 3:30 p.m. as people start getting tired and look for places to spend the night.

Meteor Crater RV Park is just down the road from Meteor Crater, which is considered to be the best preserved meteorite impact site in the world. The crater is nearly one mile across, 2.4 miles in circumference and 550 feet deep.

Some park operators say they are always busy in the summer, however, including Cindy Eagleton, who manages the 370 site Mund’s Park RV Resort.

“We’re a destination park,” she said, adding that the park not only has RV sites, but sells park model RVs, which can be used as vacation cottages during spring, summer and fall. Many residents of Phoenix and other desert cities purchase park models so they have a convenient place in the mountains to escape the summer heat.

For more information on Northern Arizona RV parks and other campgrounds in Arizona, visit GoCampingInArizona.com, the travel planning website which is hosted by the Arizona Association of RV Parks and Campgrounds.

You may also be interested in this article: Quartzsite RV Snowbird Migration Near Peak Season