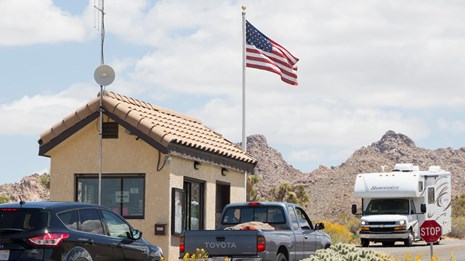 The National Park Service will commemorate Veterans Day and the service of American military members past and present with special events and free admission in parks throughout the country on November 11 and 12. The National Park Service’s American Military website contains a list of events as well as other military-related outreach and information.

“More than 100 national parks have direct connections to American military history, including frontier forts and Cold War sites, battlefields and national cemeteries, memorials and patriotic shrines, “ said Acting National Park Service Director Michael T. Reynolds. “These special places pay tribute to our veterans and serve as reminders of their selfless service and sacrifice throughout the history of our nation.”

From the colonial Minutemen who stood in defense of their rights, homes, and families near the North Bridge to modern warriors gathered for a reenlistment ceremony at the Statue of Liberty, the history of the National Park Service is interwoven with that of the United States military. In fact, each plays a part in the origin story of the other. The U.S. Army, Marine Corps, and Navy were established by the Founding Fathers in buildings preserved in Independence National Historical Park. And, in 1886, the 1st U.S. Cavalry was dispatched to Yellowstone to stop the vandalism, poaching, and trespassing that threatened the world’s first national park. The military continued to oversee several of the country’s earliest national parks until the National Park Service was established in 1916.

During World War II, Yosemite, Sequoia, Grand Canyon, Denali, Hot Springs, and Carlsbad Caverns national parks hosted rest and rehabilitation camps for service members. This tradition of providing veterans and active duty military members with opportunities for relaxation, recreation, and camaraderie in the great outdoors continues today and includes partnerships with many service-related organizations. From high-adrenaline outdoor activities to peaceful experiences in the wilderness, national parks provide a variety of opportunities to enhance physical, social, mental, and spiritual fitness. Many parks are popular destinations for active adventures like hiking, climbing, cycling, swimming, and scuba diving, while others are known for more tranquil activities such as camping, fishing, wildlife watching, and observing the night sky.

The National Park Service also salutes its employees and volunteers who have served in the military. Their skills provide a wealth of benefits to national parks and park visitors. To name just a few of the career fields they fill in the National Park Service, veterans are accountants, archeologists, heavy equipment operators, historians, human resources specialists, law enforcement officers, mechanics, park managers, pilots, and wildlife biologists. The 5,813 employees who are veterans comprise 28 percent of the workforce. Park Ranger James Pierce, a combat-wounded veteran who now works at the National Mall and Memorial Parks, said, “I am very proud to be part of the National Park Service where I can continue to serve and give back to my country, just in a different uniform. Working at national memorials that are dedicated to those who have fought and died for our freedom means everything to me.”

In addition to special programs in parks across the country, all national parks will provide free admission to everyone on November 11 and 12. When in a park, active duty members of the military and their dependents can pick up a free annual pass to all national parks. Veterans with a permanent disability are eligible for a free lifetime pass. The passes provide free entrance to more than 2,000 national parks, wildlife refuges, national forests, and other federal recreational areas. The passes can be acquired at any national park that usually charges an admission fee.