Sunday, 22 May 2022
You are here: Home Travel Bad Weather- Bad Luck for Campers 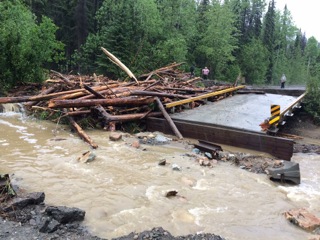 Campers Stranded In B.C. When Road Washes Out

A small village in northern British Columbia is running low on supplies after a washout to their main road on June 9th which stranded 20 campers along with local residents, television station CKPG reported.

Pictures sent into the TV station’s newsroom by stranded campers and RVers along with residents show much of the road washed away, with damage to the bridge as well.

The Omineca General Store in Manson Creek also ran out of fuel to serve the stranded 20 or so campers.

Residents in Germansen Landing say they have been stranded as well.

The Cheboygan County Sheriff’s Department responded to around 20 calls of power lines or trees down across the road, assisting county fire departments. The department also assisted the Alverno Fire Department and Cheboygan Life Support Systems ambulance personnel in moving a person on whom a tree fell at Black Lake Campground.

Fire crews had to cut their way in to the campground due to the number of trees that had been taken down by the winds and storm.

The man who was hit by the tree had been trying to work on his motorcycle, which wouldn’t run, so he could get out of the campground before the storm hit when the tree came down and hit him and the motorcycle, totaling the machine.

The firefighters and EMS had to haul the man at least 300 yards from where he was to where they had to stop with the ambulance because of the downed trees.

On Monday afternoon (June 12), strong winds were reported across the Interstate 70 corridor throughout Garfield County, Colo., including speeds up to 90 mph at Douglas Pass, but few places were hit harder than Elk Creek Campground, the Post Independent reported.

“It was like a bomb zone and you just needed to get out of the way,” said Tom Martin, who’s from the Roaring Fork Valley and camped at the campground Monday night. “I’ve never seen winds like this before and I lived in Florida for 14 years.”

The morning after the storm, uprooted trees decorated the campground, some up to 70 feet tall, and despite some property damage the seven campers that stayed the night were simply grateful nobody was injured. None more so than Betty and Al Wetherbee.

During the storm, both were sitting in their camper. By the time it ended, both were happy to be alive.

The strong winds snapped as many as five massive pine trees at the campground, one of which fell on top of Betty and Al Wetherbee’s camper.

“We were just sitting around and all the sudden I was knocked onto the ground with such force,” Betty Wetherbee explained. “Thank God the camper was sturdy because we could have been crushed.

You may also be interested in these articles:
RV Driving Tips for Extreme Weather
Keep Your RV Safe During a Storm