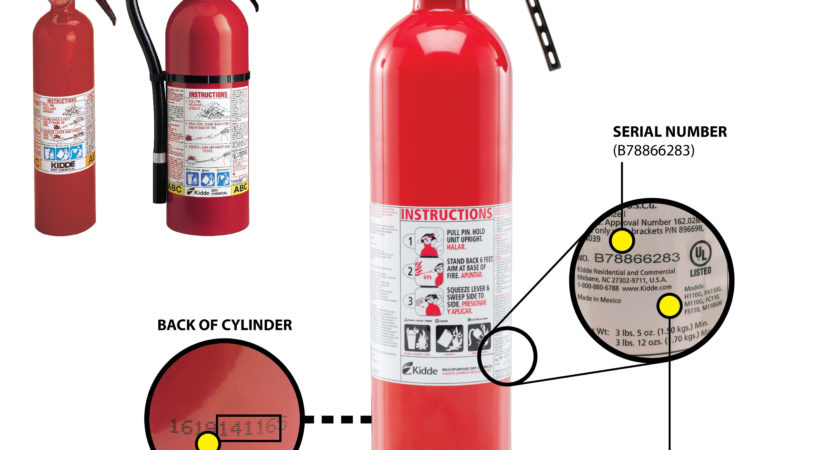 Editor’s note: Millions of Fire Extinguishers Recalled and it apperars may be Kidde is overwhelmed. Please do not wait for a replacement from them. It may take months or they may just refund the cost of the extinguiser, In the meantime you will be without protection. Buy a new fire extinguisher now, they don’t cost that much, and worry about a settlement from Kidde later.

Here is an Amazon link to Fire Extinguishers but you know where you can get them locally.

Recall information for fire extinguishers used in RVs and motor vehicles can be found on NHTSA’s website.
Follow this link for Information regarding all Kidde Fire Extinguishers Recalled.

Consumers should immediately contact Kidde to request a free replacement fire extinguisher and for instructions on returning the recalled unit, as it may not work properly in a fire emergency.

Note: This recall includes fire extinguisher models that were previously recalled in March 2009 and February 2015. Kidde branded fire extinguishers included in these previously announced recalls should also be replaced. All affected model numbers are listed in the charts above.

The firm is aware of a 2014 death involving a car fire following a crash. Emergency responders could not get the recalled Kidde fire extinguishers to work. There have been approximately 391 reports of failed or limited activation or nozzle detachment, including the fatality, approximately 16 injuries, including smoke inhalation and minor burns, and approximately 91 reports of property damage.

Menards, Montgomery Ward, Sears, The Home Depot, Walmart and other department, home and hardware stores nationwide, and online at Amazon.com, ShopKidde.com and other online retailers for between $12 and $50 and for about $200 for model XL 5MR. These fire extinguishers were also sold with commercial trucks, recreational vehicles, personal watercraft and boats.

Manufactured In:
United States and Mexico
Units:
About 37.8 million (in addition, 2.7 million in Canada)

RV Fire! We Should All be Aware of the Possibility

How to reduce the risk of an RV fire