Today’s tip comes from Allen Inks
I bought two 2000 watt portable Honda generators (model EU2000i) and cable to connect them in parallel, and feed with a 30 amp outlet. 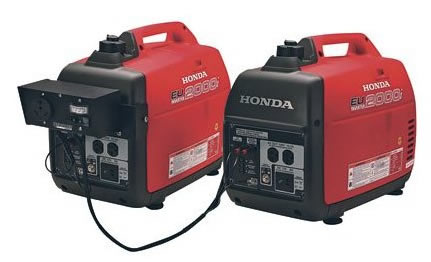 This arrangement allows me to run just one generator if that’s all I need (not running microwave or AC). These generators have an “eco” setting which allows each to run really quietly, with minimal gas usage, until a large electrical load is applied. At that time it ramps up it’s output. Although louder when under a heavy load, each one is still much quieter than most generators I hear at campgrounds (but what about the ones I don’t hear???? lol).

My generators are small enough that I can easily pick them up and move them around … I run them at the far end of my shore power cable, and can’t hear them inside the trailer.

The two generators and a can of gas fit into the compartment that was built into my trailer to hold a permanently installed generator, if we ever decide to install one. I DO NOT RUN THE GENERATORS IN THAT COMPARTMENT!

A benefit of this arrangement is that I have a portable generator to power tools at remote locations (such as when using power tools along the back fence of my lot – several hundred feet from the nearest outlet). I can also use this system in case of a power outage at my house (indeed, I actually have a spare one to lend to one of my neighbors, if needed).

The down side of this arrangement is that I can’t remotely start the generators (a real downside when it’s raining!). I have to set them up each time I use them. I’ve only used them “for real” about 5 times in the 2 1/2 years I’ve owned them. Every year when dry camping for a week at the Oshkosh AirVenture air show, and a couple of times when long stretches of cloudy weather prevented my 2 solar panels from keeping the batteries charged when we were staying in national parks with no electric hook ups.

I’ve got to believe that they’d be very attractive to thieves. I use a good quality bicycle cable lock run through the handles and around a tree or the bumper but I know that would stop a determined thief for about 30 seconds. On the other hand, I’ve not had one stolen when I had them set out, chained up.

Thanks for another great tip Allen!