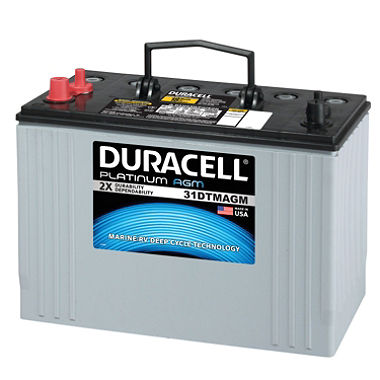 There are battery types for different purposes. It’s important to know your motorhome battery differences because the chassis battery and the coach or house battery are different types.

A chassis battery starts the engine and runs the automotive systems in either the motorhome. A ‘coach’ or ‘house’ battery powers the lights, furnace, water pump and other 12 volt devices in the coach.

Motorhome battery differences start with how they are built.

The chassis or engine starting battery is constructed of many thin plates to supply high current for the short burst of time it takes to start a cold engine. It is then quickly recharged by the engine alternator.

A deep cycle/RV battery for the coach is built with fewer but thick lead plates to supply relatively smaller amounts of current for long periods of time without needing to be recharged right away. A deep cycle battery requires a longer recharge time at a lower current level to be fully and safely recharged. The properties of the deep cycle battery make it ideal for use as a house battery.

CCA (Cold Cranking Amps)
A test conducted at 0°F measures the maximum current a battery will produce, for only 30 seconds, down to an end voltage of only 7.2V. (Note that maximum current is never stated.) This test is valid only in selecting the battery to be used in starting your engine. It cannot be converted to a figure useful in determining low amp draw over long periods as in the RV house battery.

AH (Ampere Hour) Rating
A given number of amps for a given number of hours (amps x hours) down to an end point of l0.5V is used to calculate the frequently seen AH rating. The l0.5V end point is standard. Some manufacturers put the AH rating on their batteries …they just don’t tell you how they measured it. The retailer may provide a chart listing capacities in amps and time. Multiplying these will allow comparing one brand against another.

You may also want to read the articles below:

———————-
“RV Electrical Systems: A Basic Guide to Troubleshooting, Repairing and Improvement” covers both AC and DC electrical systems and is another must have. Excellent 12-volt coverage and the best source of information on 120 volt AC systems. If it’s not covered in this book, you can probably get along without it. The authors go into extraordinary detail without getting into engineering “lingo” and they tell you things nobody else does, and those things many authors assume you already know — that you don’t. RV Electrical Systems is available at Amazon.