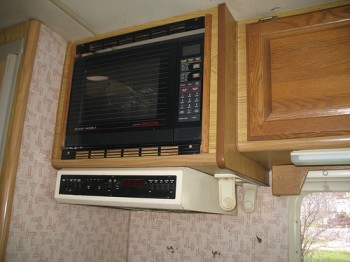 One of the members of the RVbasics email group wrote that her microwave oven had died and asked the group if she could get a new one that would fit at a local store or if it had to be a special RV model.

The consensus of the replies was any microwave that will fit in the space and her budget would be fine. Some work on the trim molding may be needed be easily accomplished. One member suggested replacing the microwave with a combination microwave/convection oven.

“My microwave died on me two winters ago while I was camping out in Texas for the winter.

I was about to buy another one when I decided to remove it and take the outer case off. I noticed a fuse that was burnt out. I took the fuse to the local Radio Shack and found a replacement fuse. I replaced the fuse and the microwave and been working just fine since.
Not sure if it would be the same for you, just thought I’d mention my microwave fix.

I, too, have replaced a blown fuse in a microwave with the same result. The outer case is usually easy to remove and the fuse should be in plain sight and easily removed as well. Do I have to say… make sure the unit is unplugged from power.

Naturally, if you are not comfortable poking around inside home appliances you shouldn’t attempt this repair. Also, if the new fuse blows immediately after startup the oven should probably be replaced.