by Fran Crawford
It has been said… especially by those of us who fulltime RV …that people who design recreational vehicles very seldom are RVers themselves.

For instance, in the great room of our fifth wheel we have ‘overhead’ storage very similar to those in an airliner. Ours are made of wood, but similar because they hinge open from bottom to top. One of the things wrong with that (I’m sure if yours are like these you have noticed) is the fact that the struts don’t hold the doors up. After a couple of good knocks on the knuckles I have learned it is a two handed job putting dishes away or getting them out. 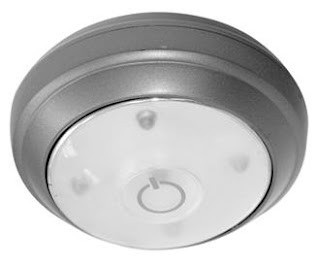 The other big problem with these doors is that they block the light from the fixtures in the ceiling above each one. This was a bigger problem in the storage cabinet over the sink. We keep bread, chips, tortillas, etc. up there and even in the daylight it was pretty dark inside.

Steven bought a couple sets of those little round, flat stick on lights that turn on when you push them. One on the ceiling of the bread cabinet is just what was needed. He put another on the wall that is a right angle against the microwave so we can use it after dark without needing to turn on the overhead lights. He stuck a light in outside storage spaces and at the head of the bed since there was a lack of electrical outlets there.

Get More RV Tips at RVTipOfTheDay.com