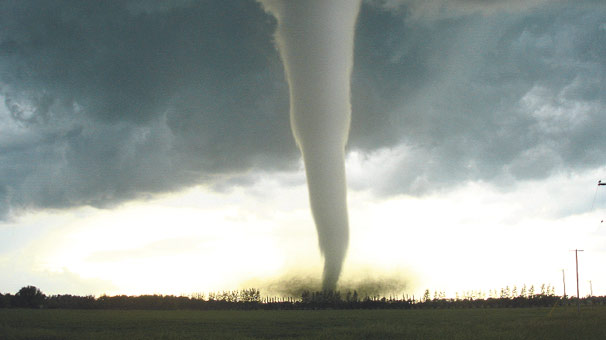 A newborn baby was killed and more than two dozen people were injured when a tornado whipped through a North Dakota oil patch city overnight, overturning  RVs and demolishing more than 100 structures, officials said Tuesday, July 10.

According to STL News, the storm moved through Watford City, in the northwestern part of the state, shortly after hitting an RV park the hardest. About 20 of the reported 28 injured were staying at the Prairie View RV Park where high winds overturned some campers and damaged mobile homes.

McKenzie County Sheriff Gary Schwartzenberger told The Bismarck Tribune late Tuesday that a one-week-old boy died from injuries sustained when the family’s trailer home flipped in the storm. The child has not yet been identified.

National Weather Service classified the tornado as an EF2, which is defined by winds speeds between 111 and 135 mph. He said wind speeds reached 127 mph in Watford City.

Clifford Bowden, 37, was in his RV when the storm struck.

“My dog was with me and the next thing you knew the storm picked up my camper and slammed it on the ground. It felt like we were weightless,” Bowden said.