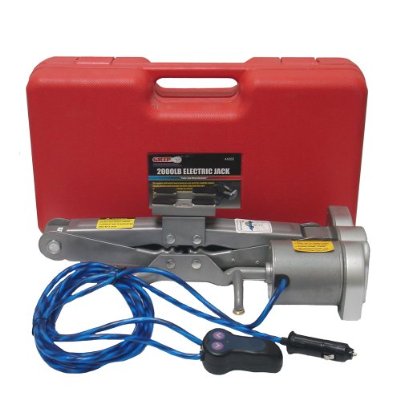 I found a neat little powered scissor jack at a local discount tool store… later I found one similar on Amazon for a cheaper price. Although mine is rated at two tons, the other is rated at one. Not sure why they both look the same in the photos. The motor on mine may be bigger?

Anyway, I thought maybe, with a little modification, a pair of them would work as stabilizer jacks on the back of my fifth wheel RV. I bought one to see how it worked and see what I might be able to rig up. With a two ton lift capacity it was strong enough to lift the rear of the the fifth wheel, but it’s 13 inch maximum lift was too short without help from a 6″ block. The whole idea was to make the stabilizing process easier. Trading power jacks for setting blocks seems like a wash. So for now, I’ll keep cranking the jacks down by hand.

The jack really is a built better than I expected. It’s sturdy for it’s size and has limit switches on both down and up travel, and it has heavy-duty wiring. However the gears inside are plastic. They make some pretty tough plastic these days so who knows.

I can see how the jack would be handy for changing the tire on your toad or travel trailer. If you don’t have a power tongue jack on your TT this little jack would make a cheaper alternative to a traditional powered trailer tongue jack.

The 12 volt power cord is long enough to reach the cigarette plug if you are using the jack to lift your toad but for use on a travel trailer you may have to pair it with a 12 volt power pack.
—————-
Get 12V DC Powered Electric Scissor Jack from Amazon.com